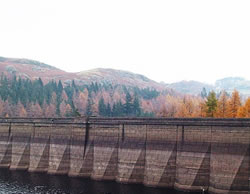 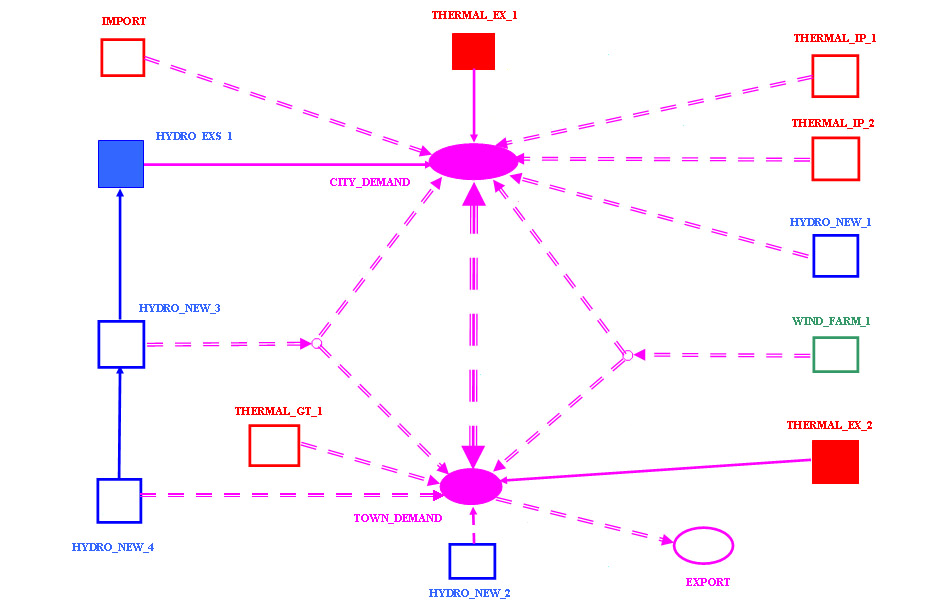 When optimising the development of integrated power supply systems the economic objective is to minimise total investment and operating costs over the planning period. However, a lack of software capable of simultaneously optimising both aspects has made it customary to optimise generation plant additions before designing a complementary transmission system.

At the same time existing generation planning packages can suffer from important limitations when applied to hydro-thermal systems. These include failure to ensure the optimal selection and scheduling of candidate hydro plants, or take account of project inter-dependencies and electricity demands having disparate supply benefits and deficit (unserved energy) penalties.

However, advances in computer technology and mathematical programming algorithms now make it possible to create generalised software able to take explicit account of such factors while simultaneously optimising generation and transmission system additions.

CAPRICORN has been developed to provide a powerful, yet user friendly, software package for optimising and simulating the development of integrated power supply systems of considerable size and complexity. It consists of Optimisation and Simulation modules sharing a common set of input data files.

In addition to investment and operating costs, and constraints on component usage, account can be taken of statutory and environmental constraints, and the imposition of demand management measures. Load flow modelling of transmission systems and multiple demand areas also enables consideration of carriage ('wheeling') costs, and the determination of long and short term marginal supply costs.

CAPRICORN includes extensive facilities for the editing of input data files, the interactive definition of alternative expansion plans, the display of detailed results in graphical, tabular and 'mimic' diagram form, and their database storage in Microsoft ACCESS© format.

The theoretical system used to develop the module is illustrated on the front page of this brochure, with existing components shown as solid shapes and candidate additions in outline.

Up to 5 'hydrological conditions' can be considered, with different calendar monthly power and energy availabilities being assigned to each hydropower plant. Their 'probabilities of occurrence' may, for example, be associated with 'very dry' (firm), 'dry', 'average', 'wet', and 'very wet' conditions. Such data can be provided by PWSC's AQUARIUS software, whilst monthly non-hydro plant availabilities can be used to take account of maintenance schedules.

Using the Electricity Demands file monthly electricity demands are input as the load, in MW, for each of up to 8 blocks of specified duration. These demands can be varied as a function of hydrological probability, enabling the modelling of demand management measures. Differential unit prices for supplied energy and costs of unserved energy can be associated with each individual electricity demand modelled.

The Fixed Data and Economic Parameter Data files are used to specify the expansion planning period, the division between annual and monthly time steps, and the discount and variable operating (fuel) cost inflation rates.

Additional constraints, such as emission limits, can be defined in terms of the contributions from individual generating plant (per MWh), and the maximum or minimum quantity to be output in each planning year.

The Linear Programming (LP) problem is automatically formulated from the system configuration data contained in the Catalogue Data file, together with that relating to the demands to be supplied, economic parameters, and user defined constraints.

The formulation involves the definition of the decision variables to be optimised and 'less than or equal' (<=), 'greater than or equal' (>=) and 'equality' (=) constraints which encompass individual and multiple load blocks and time steps. Commissioning Variables (CV's) are used to optimise the fraction of each candidate generation plant, transmission line or demand brought into service in each time step. The associated objective function coefficients are the unit investment costs per MW, less any salvage benefits that would accrue at the end of the analysis period, discounted to the start of the planning period.

The costs of meeting electricity demands in each time step and load block, and under each hydrological condition, are minimised by optimising the outputs of each generating plant, the flows in each transmission line, and any demand area deficits.

In addition to constraints used to impose limits on maximum and minimum generation plant outputs and transmission line flows in each load block, additional <= constraints are used to ensure that for the sum of the CV's for each generation plant, transmission line and demand area are less than or equal to 1, and that budgetary limits are observed. >= constraints are used to impose lower limits on energy production, such as are often incorporated in Power Purchase Agreements.

It can be noted that the facility to set supply benefits as well as penalty costs on a demand area basis means that a 'global' least cost solution, and the optimal level of exports and imports in each time step, can be obtained.

MILP algorithms initially determine the optimum 'Continuous' LP (CLP) solution before proceeding to find the best mixed integer solution by systematically fixing the integer variables to permitted values and re-solving. As a result, the times required to solve MILP problems are significantly longer than those required to find the initial continuous solution.

While the concept of building, say, 0.37 of a hydro plant is clearly unrealistic, it can be noted that CLP solutions may, in themselves, provide useful information. For example, by indicating, for each expansion planning year, the optimum capacities of new transmission lines and 'generic' thermal plants i.e. those that can be 'repeated' over the expansion planning period, the economic quantities of electrical energy to be imported and exported, and even the optimum staging of large capacity hydro plants.

CAPRICORN therefore allows the specification of which CV's are to be restricted to binary (0 or 1) values during an optimisation.

As shown below, CAPRICORN displays optimisation results in the form of the installed capacities of each component in each planning step, together with the individual energy demands, the system energy production under 'firm' and 'average' hydrological conditions, the total installed capacity, investment costs, operating costs, deficit (unserved energy) penalties and supply benefits. It can be noted that entries with a grey background indicate that a component's commissioning date is fixed.

Similar tables can be produced which show the energy generated by each plant under each of the hydrological conditions modelled together with transmission line losses and the associated total system values. Such tables can also be output as Comma Separated Value files for input to spreadsheet programs.

An Expansion Plan Definition file can also be produced, containing the optimised component commissioning and retirement dates, for input to the Simulation Module. 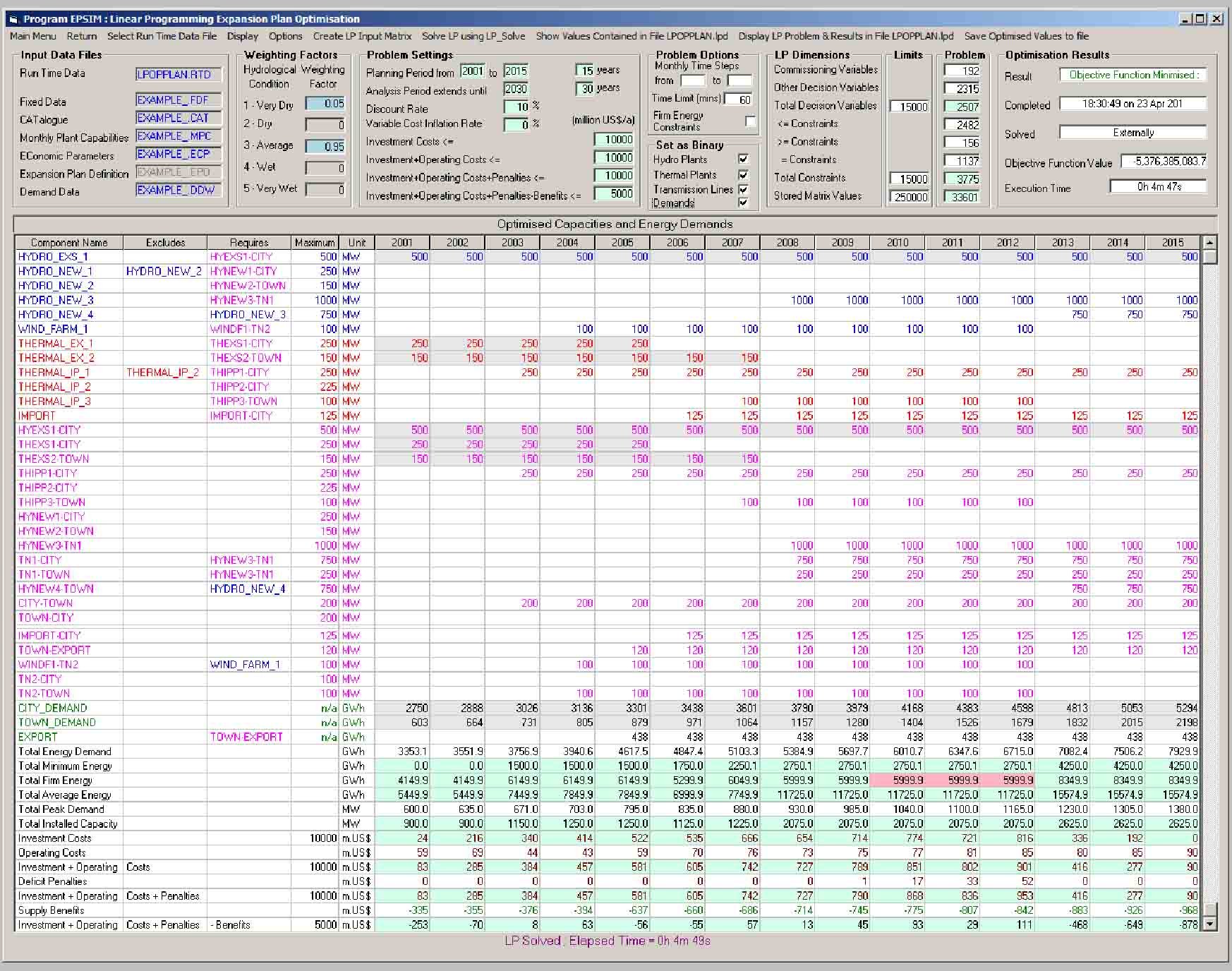 As there are usually non-quantifiable factors to be considered when deriving acceptable expansion plans, solutions obtained using formal optimisation techniques such as MILP can be viewed as starting solutions requiring some subsequent refinement. For example, transmission system modelling based on load flows and linear losses needs to be followed up with detailed electrical network analyses.

The CAPRICORN Simulation Module permits the rapid evaluation of expansion plans defined by component commissioning and retirement dates. A monthly time step is employed for deterministic or probabilistic LP based load dispatch optimisations, which can take account of transmission costs and losses as well as supply rationing.

Hydro plant capacity and energy availabilities associated with up to five hydrological conditions can be considered, as well as hydraulic interactions between developments. Generation plant capabilities can also be varied as a function of the expansion planning year.

All CAPRICORN code has been written by PWSC, thereby eliminating reliance on third-party suppliers.

In addition to expansion planning, potential applications of CAPRICORN include import and export tariff negotiations, tariff setting based on long-term marginal costs, and the comparison of hydro project variants e.g. 'run-of-river' versus a more expensive storage development.

CAPRICORN is available for licensed purchase or leasing by utilities, consultants and lending agencies, subject to standard software protection measures being installed.